Eutrophication is an emerging global issue associated with increasing anthropogenic nutrient loading (e.g., nitrogen and phosphorus). The increased nutrient loading by activities such as household effluent, industrial wastewater, and/or fertilizers supplied to coastal waters around the world leads to overgrowth of phytoplankton that results in the appearance of red-tides and/or hypoxia. Such degradation of coastal ecosystems is termed “anthropogenic eutrophication”. The impacts and extent of this anthropogenic eutrophication are often limited to regions with dedicated monitoring programmes. So, here we introduce the Global Eutrophication Watch, the first global and Google Earth Engine (GEE)-based interactive assessment tool of coastal eutrophication potential (CEP) worldwide.

In this tool, satellite-derived chlorophyll-a (CHL) data from 2003 to 2020 with 4 km of spatial resolution were applied for the screening of CEP globally. On the other, a regional dataset with 1 km spatial resolution and covering the period from 1998 to 2020 were used to evaluate CEP in the Northwest Pacific region. The regional dataset has improved CHL estimates and especially relevant for the Yellow Sea and the East China Sea.

Through the sole use of satellite derived CHL, a proxy for phytoplankton biomass, the tool evaluates the levels and trends of CHL of the world oceans and large lakes and classify them into six classes, that is, three associated with CHL trends (D-decreasing, N-no trend, and I-increasing) and two with CHL levels (H-high, L-low). In this way, a preliminary detection of eutrophication (LI, HI) and oligotrophication (LD, HD) potential waters throughout the world is enabled. Such a map provides coastal water managers an indicator that help them decide where further assessment is necessary.

This is unprecedented as the tool is solely based on satellite derived CHL and runs the computations on the fly using the power of the Google Earth Engine (GEE) while providing an interactive environment that let users evaluate different CHL levels as well as trend assessment intervals. The tool effectively identifies areas of known eutrophication with severe symptoms, like dead zones (areas with very low dissolved oxygen), as well as those with limited to no information of the eutrophication. For example, the app was able to highlight improving water quality in the Bohai Sea as shown in the two comparative assessments (Figure 1). In addition, oligotrophication potential was also identified by the app. Some Japanese coastal waters that have suffered from anthropogenic eutrophication in the past are now becoming oligotrophic due to artificial decrease in volume of nutrient loading. This has also resulted in decrease in fishery production.

The Global Eutrophication Watch introduces the prospect for a consistent global assessment of eutrophication trends with major implications for monitoring Sustainable Development Goals (SDGs) and the application of Earth Observations in support of SDGs.

The obtained map of CEP from the Global Eutrophication Watch is relevant in providing eutrophication extent and context as well as in providing information of water quality to coastal water managers for required management interventions. 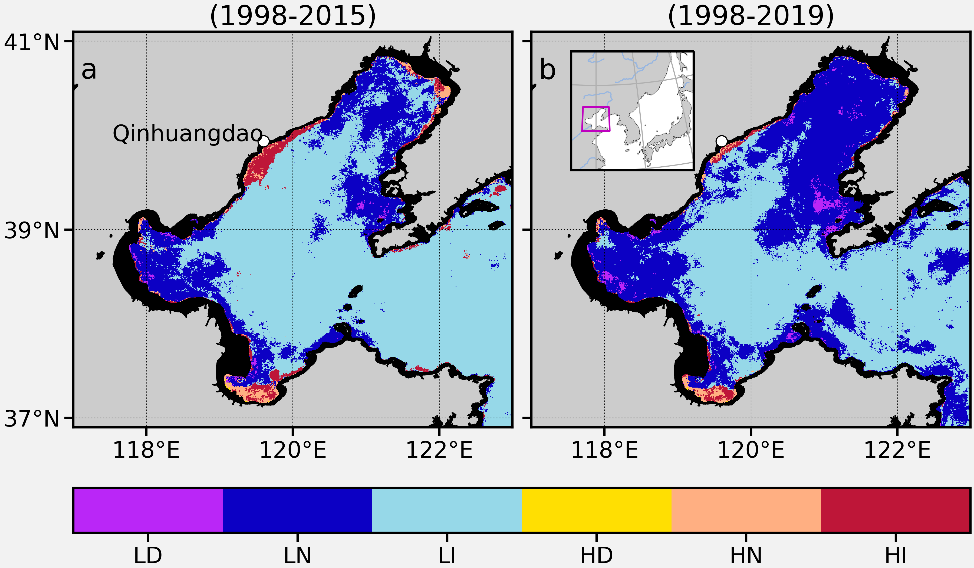 Figure 1. Map of coastal eutrophication potential (CEP) in the Bohai Sea. LD, LN, and LI depict the status as being low CHL (α < 5 mg m–3) with decreasing trend, no trend and increasing trend, respectively. HD, HN and HI indicate high CHL (α ≥ 5 mg m–3) with the three above-mentioned trends, respectively. a Preliminary assessment of CEP for the period 1998-2015. b Same as (a) but for the period 1998-2019. The rectangle in magenta (b) shows the location of the Bohai Sea.